Researchers looking for unequivocal markers of periodontitis to develop a simple test for infection have been focusing on saliva, a mirror of the body 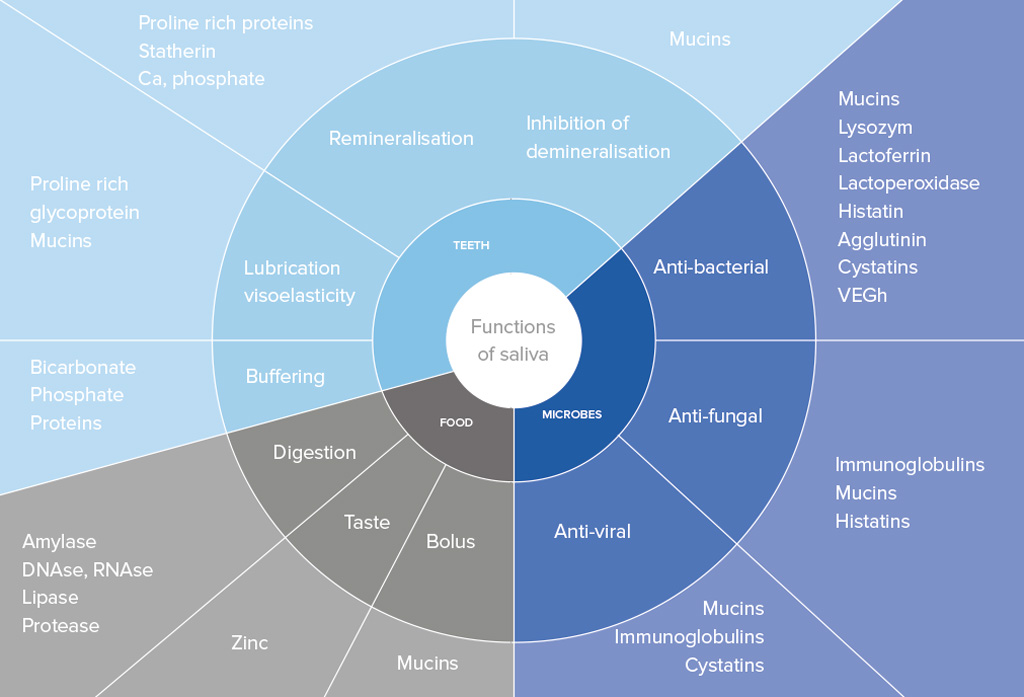 A chart showing the functions of saliva

Periodontitis is a term that refers to a heterogeneous group of diseases characterised by loss of the tooth-supporting tissues. It is well established that periodontal diseases are of an infectious nature and the impact of dental plaque biofilms on the etiology of periodontal diseases has been studied in details. In fact, certain bacterial pathogens are considered to play a significant role in the pathogenesis of periodontitis, formation of the periodontal pocket, destruction of the connective tissue and resorption of the alveolar bone.

Therefore, the primary cause of periodontitis is bacteria, and when the quantitative and qualitative change in bacterial composition in the oral cavity is such that homeostasis cannot be maintained any longer, the host response appears to be impaired and the activity of the tissues become abnormal.

A publication from Hasturk et al. (2007) outstandingly defined the possible pathogenesis of the periodontal infections; in fact, Hasturk and co-workers suggested that while the etiology of periodontitis is bacteria, the pathogenesis is inflammatory.

In other words, the interaction between the pathogenic bacteria and the host’s defence system could lead to the development of an inflammatory process.

Once periodontitis is established, the inflammatory infiltration of periodontal tissues is composed of different immunological cell types. These cells produce a large repertoire of specific types of cytokines and chemokines, which could play a significant role in the pathogenesis of periodontitis. Some of these, together with the end products of periodontal tissue destruction, could act as possible biomarkers and eventually could have diagnostic value by identifying patients with enhanced disease susceptibility and sites with active disease. They could also serve as surrogate end points for the monitoring of the patient treatment effects and treatment status, to tailor the maintenance care based on the biological needs of the subjects.

These biological mediators could support the clinical measurements already used in the routine diagnosis of periodontal diseases such as probing pocket depth, bleeding on probing, clinical attachment levels, plaque index and radiographs quantifying alveolar bone level. Nevertheless, they are often of limited usefulness because they are indicators of previous periodontal disease rather than the present disease activity. In addition, current periodontal examination procedures performed at single visit cannot determine whether or not sites are currently undergoing additional attachment loss.

Nevertheless, researchers have been searching actively for unequivocal markers of periodontitis in different biological sources such as blood or serum, subgingival plaque sample, gingival crevicular fluid (GCF) and saliva to develop a simple test, to be used as chairside test or home-use device, to determine whether a patient suffers from periodontitis and needs therapy, as opposed to another patient who needs no intervention even though he/she has gingivitis and/or to establish a “custom-made” frequency of recall appointments.

The aim of this literature review is to summarise data from the literature on periodontal disease markers with special focus on saliva.

Saliva is a mirror of the body that contains a large number of proteins and peptides that are responsible for maintaining the integrity of the oral cavity (see table opposite page).

Saliva also meets the demand for inexpensive and easy-to-use diagnostic aids due to the non-invasive and simple nature of its collection. It can be collected with or without stimulation. The collection of gland specific saliva (from parotid, submandibular and sublingual gland) can allow differences in the amount of fluid and constituents of each gland to be determined. Differently, whole saliva consists of a mixture of oral fluids, and includes secretions of the major and minor salivary glands and constituents of non-salivary origin, such as derivates from GCF, serum and blood cells in case of bleeding gingiva or oral wounds, and expectorated bronchial secretions. It might also contain bacteria, bacterial products, viruses, fungi, desquamated epithelial cells and food debris.

The use of saliva for diagnosis of periodontal disease activity has been the subject of considerable research activity; in fact, it contains locally and systemically derived markers of periodontitis, thus offering the basis for a specific test. Several potential markers have been investigated to produce an assay system suitable for use in dental practices.

The main candidates in the search for biomarkers of periodontal disease activity fall into different general categories:

While the bacterial infection triggers the destructive process, the host immune response to the bacterial challenge is responsible for the molecular processes leading to periodontal tissue destruction. The interaction between the pathogenic bacteria and their (toxic) components and the host defence system could lead to the development of periodontal pockets, loss of connective tissue, and bone resorption. Once periodontitis is established, the inflammatory infiltration is composed of different cell types, such as neutrophils, T and B lymphocytes, and macrophages migrating into the perivascular connective tissue.

The substances released by the inflammatory immune cells as well as by resident fibroblasts endothelial cells and others during the disease process include a large repertoire of molecules, such as antibodies, complement proteins, acute phase proteins and a broad range of inflammatory mediators (i.e. cytokines, chemokines, arachidonic acid metabolites etc.).

Non-enzymatic proteins have been examined in a number of studies to investigate whether or not there was a relation between periodontal disease and these proteins in saliva. For example, platelet-activating factor (PAF), a potent phospholipid inflammatory mediator, was identified in the mixed saliva of subjects with periodontal disease. Salivary PAF levels have been found to be significantly higher in untreated chronic periodontitis patients compared to controls (Garito et al. 1995). Its levels correlate with clinical indices of disease severity and extent of the disease. Furthermore, a longitudinal evaluation of the effect of periodontal therapy on salivary PAF levels in chronic adult periodontitis patients was studied and initial salivary PAF levels were found to be decreased following supragingival plaque control and further reduced following scaling and root planning (Rash et al. 1995).

Saliva contains also numerous enzymes that degrade proteins, proteoglycans, lipids and carbohydrates. Enzymes in saliva can originate from GCF, salivary glands, microorganisms, epithelial cells and polymorphonuclear leukocytes (PMNs). PMNs are an important cell type in host defense against periodontopathogenic bacteria. Their primary role of phagocytosis of microorganisms may promote local tissue destruction by the release of tissue-degrading enzymes. In fact, PMNs granules contain hydrolytic neutral enzymes, such as elestase, cathepsin B, cathepsin D, glucuronidase. Matrix metalloproteinases (MMPs), peroxidase, lysozyme, lactoferrin, and many other enzymes are also sheltered in PMNs granules. Some of these are now discussed below.

MMPs represent a neutrophil granule content, which are involved in many biological processes, including the tissue destruction in periodontitis. MMPs degrade mostly components of the extracellular matrix (ECM) and many non-ECM molecules. The major MMPs in neutrophils are MMP-8 and -9 and these are the main collagen-degrading enzymes in saliva. Since MMPs can potentially cause tissue damage, their activity is controlled by four members of the tissue inhibitor of metallo-proteinase family (TIMP). The presence of MMPs in saliva has been studied comprehensively with ELISA techniques. The levels of MMP-1, -3, -8 and -9 and their endogenous inhibitor, TIMP-1, in saliva of patients with adult periodontitis were compared to localised juvenile periodontitis and controls. Both MMP-1 and TIMP-1 were detected in all studied saliva samples, but interestingly no significant differences were detected between adult periodontitis and healthy control groups (Ingman et al. 1996).

PMNs and macrophages produce reactive oxygen species (ROS) within their phagolysosomes and these may spill over into the tissues during phagocytosis or when they degenerate. This may cause bystander tissue damage around these cells. ROS have a great capacity to damage cells and tissues and are scavenged for within the tissues by antioxidants.

Another research group investigated pheripheral (serum) and local (saliva) total antioxidant (TAO) capacities of chronic periodontitis and healthy patients using an enhanced chemiluminescent assay (Chapple et al. 1997). There were no differences in the serum TAO capacities but the salivary TAO capacities were significantly lower in the chronic periodontitis group compared with the healthy group. Thus the saliva of chronic periodontitis patients may have reduced TAO capacity, which could result from increased ROS production by inflammatory cells. The enhanced chemiluminescent assay provides a rapid simple method of measuring the total antioxidant defense in small volumes of biological fluid and hence could have diagnostic use. More work on its relationship to the progression of periodontal disease, and its capacity as biomarker needs to be done before this could be properly assessed.

Another enzymatic category, which has received the attention of periodontal researchers, is represented by enzymes released by dead cells (cytosolic enzymes). Aspartate amino transferase (AST) and lactate dehydrogenase (LHD) are soluble cytoplasmic enzymes that are confined to the cell cytoplasmic enzymes, and they can be released by dead or dying cells. Since cell death is an integral and essential component of periodontal tissue destruction, these enzymes should be released during this process and should pass with the inflammatory exudates into GCF and saliva.

While we do not have relevant studies on AST in saliva, a recent report demonstrated an increased LDH salivary activity in association with periodontal disease, specifically with the presence of calculus and pockets greater than 5mm (de La Peña et al. 2007). Clearly these markers are yet to be further investigated for their potential as salivary biomarkers for periodontitis.

Of the potential markers, PMNs-derived enzymes appear to be worthy of further study. The concentrations of host-derived elastase, chitinase and -glucuronidase are increased in patients with periodontitis and decrease following therapy (Lamster et al. 2003).

However, at the present state of knowledge, their salivary levels are not predictive of disease activity, which is the basic requirement of a diagnostic test.

Dr Galassi graduated with Honours from the MSc programme in Periodontology and Implant Dentistry at the Academic Center for Dentistry in Amsterdam (ACTA), in 2011. Has great interest in dental research, and he has published in peer-reviewed journals and written some chapters for periodontology textbooks.

This article has no accompanying CPD quiz.